One of my only cooking rules is not to make Indian in my home, I’ve never had positive results. Today however I was in the mood to break my rule and crack the spine on one of my cookbooks, Mighty Spice. I’m a big fan of using spices whenever I can and this is the best go to cookbook for that intent! The plus side to this meal is that it yields a lot of servings and is delicious the next day, it’s also super healthy, ingredients include spinach, garlic, cumin and almonds among other things! Sooo glad I broke my rule!

*Random note, just discovered (and became obsessed with) John Legend’s new song that he wrote for the Django soundtrack, Who Did That To You.

Bring large saucepan, half-filled with water, to a boil and add the spinach. Cook 1 to 2 minutes until just wilting, then strain, reserving the cooking water. Put the spinach and a scant 1/2 cup of the cooking water into a food processor or blender and puree until smooth. If using an upright blender, remember to leave a tiny gap in the lid for the steam to escape. Transfer the spinach to a bowl and set aside to cool.

Heat the oil in a large saucepan over medium heat and throw in the cumin seeds. Wait 10 seconds until they start crackling, then pour in the tomato mixture. Give it a good stir, cover, reduce the heat to low and simmer 30 minutes, stirring occasionally.

Tip in the spinach, chicken and cream, if using, and stir well. Turn the heat up to medium-high and cook, stirring occasionally, 12 to 15 minutes until the chicken is cooked through and tender.

I would really suggest making a grain dish to go along with the chicken dish, this book also has a great Herb & Spice Rice Pilaf recipe! 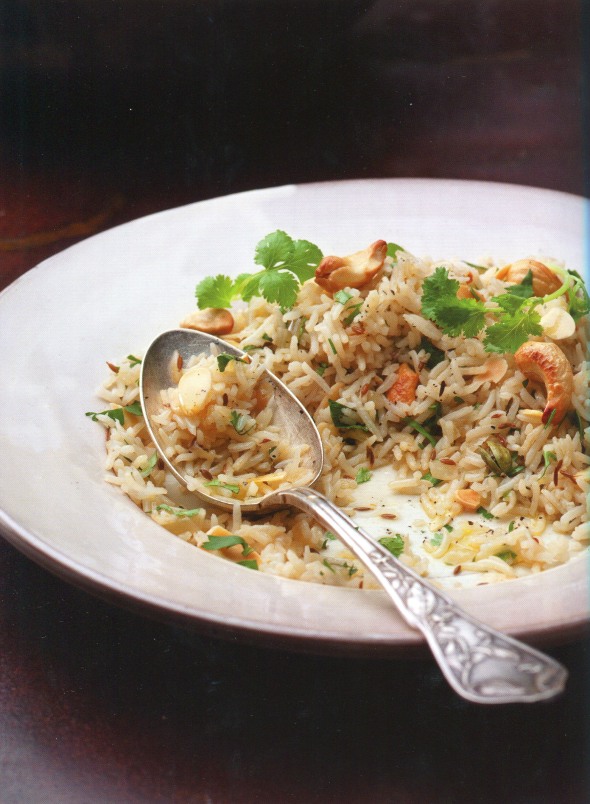 1/3 cup of cashew nuts (personally I like to add more!)

1 tablespoons of olive oil, plus extra for drizzling

1 1/2 cups of chicken or vegetable stock

Heat large skillet over medium heat. Add the cashew nuts and gently toast, shaking the pan constantly, 1 to 2 minutes. Add the almonds and continue to shake the pan 1 to 2 minutes longer until both the cashews and almonds start turning golden. Transfer the nuts to a plate and set aside.

Put the cardamom pods on a cutting board and, using the flat side of the knife, press down until they split open and reveal their seeds. This helps to release their flavor. Heat the oil in a large skillet over medium heat, then add the split cardamom pods and the cumin seeds. Stir0fry 10 to 20 seconds until the seeds start to crackle, then add the onion and continue stir-frying, stirring occasionally, 3 to 4 minutes until onion is soft.

Tip the washed rice back into the saucepan and place over medium heat. Add the onion and spice mixture and stir in the hot stock. Bring to a boil, cover, reduce the heat to low and simmer 10 to 15 minutes until all the water is absorbed and the rice is almost cooked but still has a little bite. Remove the pan from the heat and remove the lid. Place a clean dish towel over the rice, replace the lid and set aside to steam 5 to 10 minutes.

Fluff up the rice with a fork and toss together with the toasted nuts, parsley and cilantro. Season with a really good pinch of salt and pepper, drizzle a little oil over, add a few cilantro sprigs as a finishing touch and serve hot or warm.

Hope everyone is having an amazing weekend, this upcoming week its supposed to get a bit warmer, yeay for sun!

06 Jan This entry was published on January 6, 2013 at 1:18 am. It’s filed under Supper and tagged chicken, cookbook, cumin seeds, curry, dinner, django, easy, food, garlic cloves, healthy, indian, john legend, kitchen, mighty spice, rice pilaf, simple, spinach, supper, vegetarian, who did that to you. Bookmark the permalink. Follow any comments here with the RSS feed for this post.

3 thoughts on “Indian Curry and Pilaf”